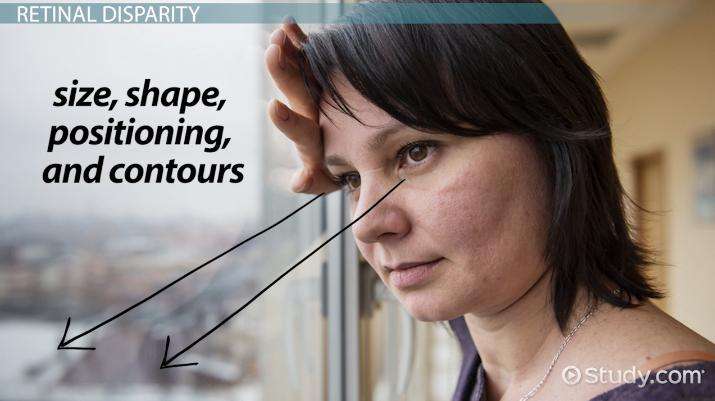 Retinal disparity, also known as binocular parallax, refers to the fact that our eyes are about 6.3 centimeters apart on our face on average and, as a result, each sees the world from a slightly different angle. You can test this by extending your pointer finger at arm’s length and alternating opening and closing your eyes. You’ll notice that, as you do this, your finger seems to shift depending on which eye you’re looking through.

Retinal disparity may seem like a cool parlor trick, but how does it actually work to give you a sense of depth perception? Well, the different angles that your right and left eyes see an object from actually enable you to see more of the object itself. You’re literally seeing the same object but from a slightly different perspective; thus, you’re taking in slightly different information about the size, shape, positioning, and contours of an object. Your brain takes these slightly different views and integrates them into a three-dimensional image of the object.

Have you ever viewed a ‘Magic Eye’ image? They appear like a random series of dots or shapes until your eyes adjust and then, bam, a 3D image appears. These types of images are known as autostereograms because they are a 3D (‘stereo’, for stereopsis) image (‘gram’) that your eyes find automatically (‘auto’) without the need of any special viewing tool. They actually rely on your retinal disparity to reconstruct the sense that a three-dimensional object is hidden in the image. They’re created by superimposing two images, one of the object as would be seen by your left eye and one of the same object as would be seen by your right eye. Once you find the right focal distance, the hidden image seems to magically pop out of nowhere because each eye is provided with the appropriate angle of the object as if it were a real 3D object sitting before you.

Binocular convergence is the other binocular cue that enables your sense of depth perception. It refers to the physiological angles that each of your eyes needs to rotate to focus on any given object. It’s what’s known as a proprioceptive sense (meaning a sense of one’s own self) in that it uses feedback information from the muscles of your eyes to understand your eyes’ rotation in their sockets and, as a result, the distance the object is from you.

Ok, so what does that even mean? Well, let’s repeat the test from above, except this time extend your pointer finger at arm’s length and, while keeping both eyes open, draw your finger towards your face. You’ll notice that at a certain point, the muscles in your eyes strain due to the degree of your eye-cross, and the single image of your finger diverges into two. If you do this test in reverse (starting at your nose, draw your finger out), at a certain point the two images of your finger will converge into one. In other words, binocular convergence is the phenomenon where your eyes rotate inwards to focus on an object, and the degree to which they rotate indicates to your brain how near or far an object is – nearer objects require a greater degree of inward rotation than objects farther from your face.

Binocular cues are visual information taken in by two eyes that enable us a sense of depth perception, or stereopsis. Retinal disparity, also known as binocular parallax, refers to the fact that each of our eyes sees the world from a slightly different angle. Binocular convergence, on the other hand, is a proprioceptive sense using feedback information from the muscles of your eyes to understand your eyes’ rotation in their sockets and, as a result, the distance the object is from you.

As you come to the end of the lesson, you should make a goal to:

Properties of the visual system that facilitate depth perception by the nature of messages that are sent to the brain.

Binocular depth cues are based on the simple fact that a person’s eyes are located in different places. One cue, binocular disparity, refers to the fact that different optical images are produced on the retinas of both eyes when viewing an object. By processing information about the degree of disparity between the images it receives, the brain produces the impression of a single object that has depth in addition to height and width.

The second cue, called binocular convergence, is based on the fact that in order to project images on the retinas, the two eyes must rotate inward toward each other. The closer the perceived object is, the more they must rotate, so the brain uses the information it receives about the degree of rotation as a cue to interpret the distance of the perceived objects. Yet another cue to depth perception is called binocular accommodation, a term that refers to the fact that the lens of the eye changes shape when it brings an image into focus on the retina. The muscular activity necessary for this accommodation acts as a signal for the brain to generate perception of depth and distance.