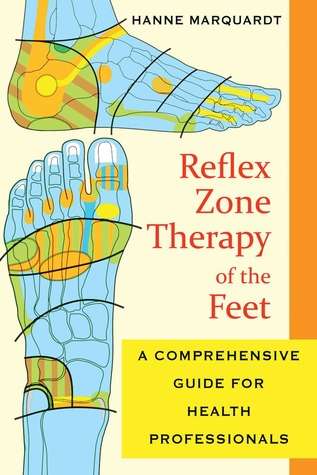 The classic reflexology reference with new material and new illustrations

• By the most well-known and experienced reflexologist in Europe today

Based on Hanne Marquardt’s early training with Eunice Ingham and her many years of practical experience as a therapist and teacher, this authoritative manual describes the reflex zones of the feet in detail. With full-color illustrated maps as well as explanations of how these zones relate to the internal organs, Marquardt’s guide to treating many common ailments such as migraine, sciatica, and bronchitis both in others and oneself has stood the test of time.

This revised edition contains completely new color illustrations throughout as well as new case studies and an expanded list of ailments and treatments. Marquardt also includes new information on symptoms, massage techniques, treating babies and children, and recent discoveries in reflexology such as the solar plexus zone. Offering new discussions of the relationship between the foot and the human form, why the feet are treated and not the hands, and recognizing the healing signs of detoxification reactions, this updated edition provides a solid foundation for those just delving in to reflexology as well as an enriched reference for bodywork professionals.

Patients presenting with headaches can be used to illustrate the variety of possible causal relationships. For example, six patients came for therapy complaining of the same symptom, namely headache.

1. The alimentary tract
2. Altered dynamics of the spinal column, particularly in the cervical vertebrae
3. Teeth and sinuses
4. The genitourinary tract
5. The solar plexus and diaphragm, whose reflex zones may be a factor in conditions of stress and psychic disturbance
6. The organs of respiration

In reality, however, it is rare to find only one of these CRZs playing a role. More frequently, we are dealing with a combination.

The toes of course comprise the symptomatic zone to be treated for a headache; but, in finding the true origin of this ailment, any or all of the zones listed above could be affected: digestive organs and respiratory tract, the spine and teeth, and urinary tract and diaphragm.

Since every patient undergoes an initial assessment to test all zones for stress, it is furthermore possible that in addition to the zones listed above, others in need of treatment might be found.

The following are examples of the dynamic relationship between body and emotions.

-A painful reflex zone to the gallbladder gives not only the impression of a physical state of illness, which may be confirmed in the laboratory, but also that in such a person “the gall overflows.”

-A painful reflex zone to the shoulder girdle gives, on the surface, evidence of tension in this area, but behind this there is frequently an additional psychical stress, so that the patient “carries a heavy burden on his shoulders.”

-Another has an extremely sensitive zone to the intestine, suffers from flatulence, and has little appetite despite careful selection of diet, all of which indicate an organic problem. Such symptoms frequently disappear spontaneously when the patient is better able to “digest” his problems.

Note: While the knowledge of the relationships between body and psyche is widely known, it has to be realized anew by each and every person and in every treatment to keep it alive. Whether, when, and in what way the therapist can discuss these relationships with a patient depends on the practitioner’s experience and sensitivity.

The question of the effectiveness of reflex zone therapy on the foot always includes the question of the patient’s reaction as well. Depending on the patient’s own readiness for internal and external order, abilities and possibilities for healing will either grow or diminish. It can thus be said that many diseases can be treated but not all people, since some lack the necessary will to be restored to health and well-being.

As a differentiated, manual form of treatment, reflex zone therapy of the foot meets a healthy and natural need on the part of both therapists and patients.

-The therapist will exercise her profession with greater commitment and devotion when she is engaged in a sensibly planned total regime and is not just treating isolated parts of the patient at random.

-Patients are, in many cases, already seeking healing and alleviation from unorthodox forms of medicine and are not wholly dependent on the apparatus of modern medicine. They will come to recognize that balanced, physically oriented organ therapy always stimulates the person’s entire energy field as well, including the psyche, with beneficial effects.

The task of an aspiring practitioner extends far beyond learning and applying the actual “technique” of the grip sequence. With skilled, imaginative, and informed reflex-zone massage to the feet the whole person can be treated, the rational, the emotional, and the physical. The therapist acquires a broad view of medicine and learns to apply her skills with compassion.

-On the rational level by learning new theoretical foundations and relationships.

-On the emotional level through healthy empathy when learning to deal with a patient’s ailments–not through personal empathy since this loses the necessary professional distance, but through attentive care.

-On the physical level, through the balanced use of his strength; thus, the therapist helps a person on one part of the journey from illness to health and can encourage him to take responsibility for his health.

A 42-year-old patient complained of almost daily attacks of migraine headache, which he had been having with increasing severity for the past ten years. Because of his frequent absences from work, he was about to lose his position.

On palpation the reflex zones of the head, liver, stomach, and lymphatic system were sensitive. The feet were treated at intervals of three days. After the seventh treatment the man was no longer in need of the usual drugs for his headaches, and his headaches did not recur even at times of great stress at work. He was given, in all, fourteen massages to the reflex zones of the feet, and he noted with some astonishment that his circulation had greatly improved, even though he was no longer taking any drugs for this either.

Alternative medical practice involving pressure to parts of the body

An example of a reflexology chart, demonstrating the areas of the feet that practitioners believe correspond with organs in the “zones” of the body.

Reflexology, also known as zone therapy, is an alternative medical practice involving the application of pressure to specific points on the feet, ears, and hands. This is done using thumb, finger, and hand massage techniques without the use of oil or lotion. It is based on a pseudoscientific[1] system of zones and reflex areas that purportedly reflect an image of the body on the feet and hands, with the premise that such work on the feet and hands causes a physical change to the supposedly related areas of the body.[2]

There is no convincing scientific evidence that reflexology is effective for any medical condition.[3]

In a Cochrane Collaboration review, reflexology is defined as follows: “Reflexology is gentle manipulation or pressing on certain parts of the foot to produce an effect elsewhere in the body.”[4]

The Australian Government’s Department of Health define reflexology as “a system of applying pressure, usually to the feet, which practitioners believe stimulates energy and releases ‘blockages’ in specific areas that cause pain or illness.”[5]

Practices resembling reflexology may have existed in previous historical periods. Similar practices have been documented in the histories of India, China and Egypt.[6][7] Reflexology was introduced to the United States in 1913 by William H. Fitzgerald, M.D. (1872–1942), an ear, nose, and throat specialist, and Edwin F. Bowers. Fitzgerald claimed that applying pressure had an anesthetic effect on other areas of the body.[8][9] It was modified in the 1930s and 1940s by Eunice D. Ingham (1889–1974), a nurse and physiotherapist.[10][11] Ingham claimed that the feet and hands were especially sensitive and mapped the entire body into “reflexes” on the feet, renaming “zone therapy” as reflexology.[12] Many of the modern reflexologists use Ingham’s methods, or similar techniques of reflexologist Laura Norman.[7]

In 2015 the Australian Government’s Department of Health published the results of a review of alternative therapies that sought to determine if any were suitable for being covered by health insurance; reflexology was one of 17 therapies evaluated for which no clear evidence of effectiveness was found.[5] Accordingly, in 2017, the Australian government named reflexology as a practice that would not qualify for insurance subsidy, saying this step would “ensure taxpayer funds are expended appropriately and not directed to therapies lacking evidence”.[13]

There is no consensus among reflexologists on how reflexology is supposed to work; a unifying theme is the idea that areas on the foot correspond to areas of the body and that by manipulating these one can improve health through one’s qi.[15] Reflexologists divide the body into ten equal vertical zones, five on the right and five on the left.[7] Concerns have been raised by medical professionals that treating potentially serious illnesses with reflexology, which has no proven efficacy, could delay the seeking of appropriate medical treatment.[16]

Reflexologists posit that the blockage of an energy field, invisible life force, or Qi, can prevent healing. Another tenet of reflexology is the belief that practitioners can relieve stress and pain in other parts of the body through the manipulation of the feet. One claimed explanation is that the pressure received in the feet may send signals that ‘balance’ the nervous system or release chemicals such as endorphins that reduce stress and pain. These hypotheses are rejected by the medical community who cite a lack of scientific evidence and the well-tested germ theory of disease.[7]

Reflexology’s claim to manipulate energy (Qi) is unsupported by science; there is no scientific evidence for the existence of life energy (Qi), “energy balance”, “crystalline structures” or “pathways” in the body.[1]

In Trick or Treatment? Alternative Medicine on Trial, Simon Singh states that if indeed the hands and feet “reflect” the internal organs, reflexology might be expected to explain how such “reflection” was derived from the process of Darwinian natural selection, but Singh says that no argument or evidence has been adduced.[17]

An example of a reflexology chart of the hand, demonstrating the areas that practitioners believe correspond with organs in the “zones” of the body.

In the United Kingdom, reflexology is coordinated on a voluntary basis by the Complementary and Natural Healthcare Council (CNHC). Registrants are required to meet Standards of Proficiency outlined by Profession Specific Boards[18] but since CNHC is voluntary anyone practicing can describe themselves as a reflexologist. When the CNHC began admitting reflexologists, a skeptic searched for, and found, 14 of them who were claiming efficacy on illnesses. Once pointed out, the CNHC had the claims retracted as it conflicted with the UK’s Advertising Standards Authority code.[19]

Is behavioral therapy covered by insurance