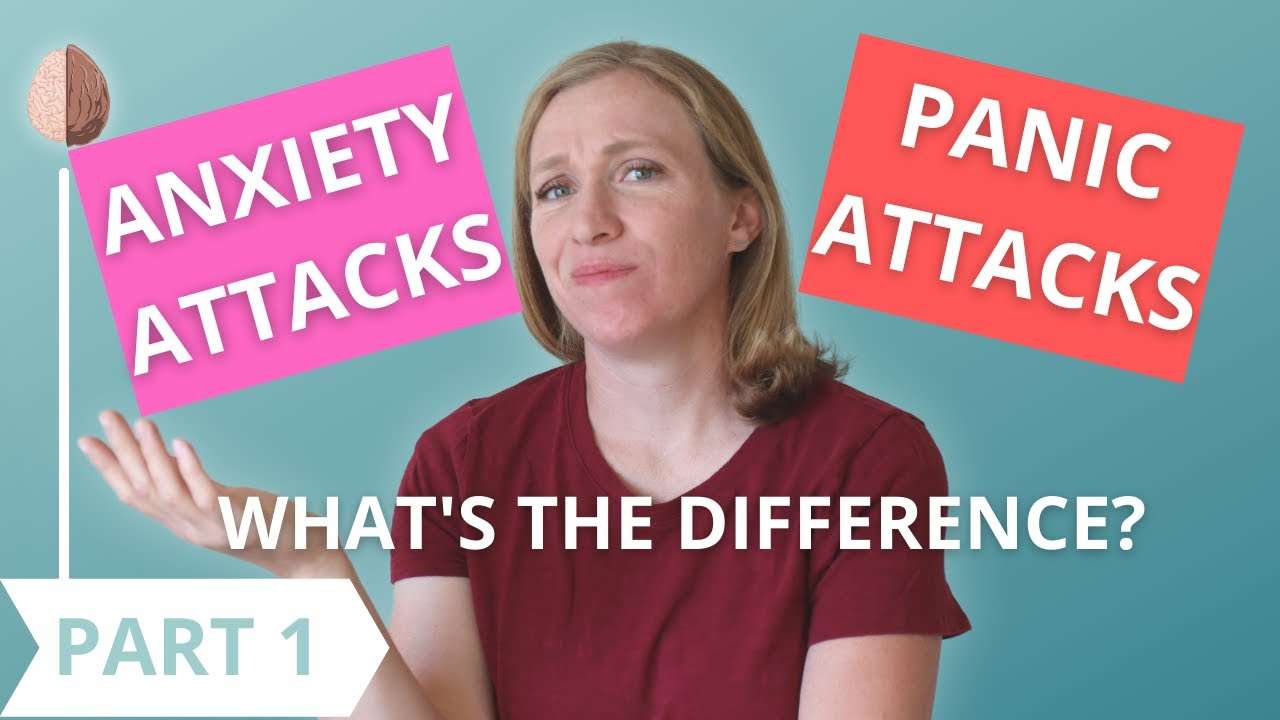 Therapy in a nutshell anxiety attack

So let’s talk about that.

If you google how to stop a panic attack, you might get really bad advice if you have chronic panic attacks. The articles all say to try to take some deep breaths, calm yourself down, distract yourself. Look, if you’ve tried this and it worked, you wouldn’t be here. So with a panic attack, and especially with panic disorder, this is the exact wrong advice. Let me explain.

An anxiety attack comes on gradually. It’s like a buildup of anxiety that overflows, like a bathtub that’s been filling up too long. So this means the treatment is all about slowly lowering the level of the water.

So if you’re overflowing with anxiety, these are the sort of things that gradually let the water drain: slowing down, calming your body, taking deep breaths, getting present, trying the 3/3/3 rule.

Get more organized and decrease your overall stress and set boundaries. Process the stress that you can’t decrease. Writing, practicing willingness, getting support, laughing, exercising. All of these techniques can help decrease overall anxiety and prevent both anxiety and panic attacks. And they may possibly help you calm down in the middle of a panic attack.

Now, panic attacks are a different beast altogether. If you’ve only ever had one panic attack or just a handful, you can try any of these previous techniques that you want. Give them a try. Just experiment and see if they work.

But if you get repeated panic attacks, then it’s likely that trying to make your panic attacks go away is actually causing recurring panic attacks. Because, you see, panic attacks are anxiety about anxiety. They are fear of fear.

There’s this Jimmy Fallon clip where they talk about something funny that they overheard.

This one’s from @Reggie Games. He says, “I once overheard a man in a stall next to me whisper to himself, “Please, not now.”

Now, Jimmy makes a great joke of it, but I can almost guarantee that it was someone in the bathroom trying to force a panic attack to not come on, because that’s the exact mindset that causes recurring panic attacks.

You start to feel some anxiety, and then your body starts to produce some stress chemicals, which triggers some uncomfortable sensations, like a faster heartbeat or an upset stomach. And you think, “Please, not now. I can’t have this panic attack now. This would be terrible.”

And the more you try to force your body to calm down, the more messages you send to your body that you’re in danger, that anxiety and panic is dangerous and must be stopped.

So in this situation, trying to calm down your body sends a message to your brain that the anxiety is actually dangerous and it must be avoided, which makes anxiety worse.

For people with panic attacks, trying to use deep breathing actually makes the problem worse. Anything you do to try to force a panic attack to go away makes them worse, and makes them come back again stronger the next time.

So when you google how to stop a panic attack and the advice is “Try to take deep breaths,” if you have recurring panic attacks, that is probably going to make you feel worse because it’s going to feed that cycle of panic attacks.

You can learn to calm down, but it’s a paradox because acceptance has to come before change, and the technique is a little bit paradoxical. So in the next post, we’re going to talk about how the panic cycle works. And in the last post, we’re going to go way in depth on how to stop recurring panic attacks.

Check out my Free Quick Start Guide to Anxiety below for more help.

Now, panic attacks suck. I’ve had a couple in my life, and they’re scary, and they make you feel sick. They get in the way of your life and your work and your friends.

But there is a straightforward process to stop recurring panic attacks. As Nick Wignall says, once you understand what panic really is and how it works, it’s possible to completely free yourself from it. So let’s talk about what leads to panic attacks so we can understand how to stop them.

Okay, so back to Steve. How did he get here?

Steve grew up with an abusive father and an enabling mother. His parents fought all the time but especially when dad was drunk. Little Steve grew up in fear.

When he was around five, he heard his parents fighting, and things were getting rough. Things were getting thrown, and he could hear screaming and smashing and breaking. He hid under his bed crying and just wondering if his mother would be killed.

Another time he was playing outside barefoot and stepped on a nail, and it went all the way through his foot. He screamed for help, and he hobbled inside, and his dad yelled at him, “Shut up. Stop crying or I’ll give you something to cry about.”

So Steve learned to be tough to hide what he was feeling, to cover it up with anger, to avoid people and just get over it. And that worked for him. Kinda. He held down jobs, mostly. Well, sometimes. He went through a couple of divorces, and he worked hard, and he did all right. He was a good man who tried to serve in his church and help his neighbors and work hard.

But later in life a few things changed. He met and married a sweet woman who was empathetic and understanding. Then he went through some serious medical issues that left him very sick for a few years. Finally, his health returned, but something about him was more tender.

The difficult experiences he had gone through had deepened his emotional sensitivity, and perhaps some medical changes also impacted him. He could no longer keep his emotions buried inside. And the more he felt, the more scared he got.

You see, Steve had learned as a child that emotions were dangerous; they meant you were weak or that you’d be shamed or punished for having them. And so emotions were scary.

When you slow it down, that takes us to the next set of skills, which is calming your bodily anxiety during an anxiety attack.

Anxiety isn’t just in your head; it’s in your body. And when you’re super upset, your body is the key to resolving anxiety. So let’s do something with your senses.

There are a lot of options here, but the goal is to get back into your body in a slow way to reconnect with your body. So I’m going to give you a bunch of options. Here are a couple you can try to find out which ones work for you.

Now, in this post I’m just going to very briefly mention these skills, but you can learn them in depth with my free course Grounding Skills for Stress and Anxiety, where I teach about 20 ways to turn on the body’s calming parasympathetic response and reduce stress and soothe anxiety. So if you want to learn more about that, check out the link in the description.

So back to grounding with our senses.

So as I give you a bunch of these tools to calm your body, you don’t have to do them all. It’s just about trying them and finding what works for you.

Next thing you could try is patting your legs bilaterally. So that means one and then the other. This can help you get back into your senses. Literally, your sensations in your body can send a message to your brain that you are safe. Your body has a built-in anti-anxiety response when you show it that you’re actually safe, and it’ll kick in. This is the parasympathetic response.

The next skill is tapping. This is also known as the emotional freedom technique. So you gently tap seven times in each of these areas: forehead, upper lip, chin, throat, right under your arm, and on your palm.

Next thing you could try is going for a walk. It’s helpful if you can do this outside, but if not, any kind of movement may help you clear your mind. And if you can get outside, that sensory experience of cold or hot air, of fresh air, of different smells, that can help your body reset too.

You can try yawning.

You can try any taste or smell, like an essential oil or a breath mint or a warhead, which is a really sour candy. Another thing about sour candies is that they release the saliva in your mouth, and when that saliva releases, that’s also a parasympathetic response.

Another thing you could try is leaning into what you’re feeling and exaggerating the sensations you’re having. So for example, if you’re feeling jittery legs, jiggle your legs extra hard for a minute. Let yourself lean into that feeling.

You could try stretching. Just stretch out all of your muscles. That can help you come back to your senses. And so can grounding with the five senses. This is a pretty well-known exercise where you name five things you can see, four things you can feel, three things you can hear, two things you can smell, and one thing you can taste.

You can also try progressive muscle relaxation. This is a systematic way to tense and relax muscle groups to gain this conscious ability to relax.

Now, if you are in physical danger, you should leave or take some action to escape. But if not, use some positive self-talk. Say, “This feeling will pass.” Or you could say, “This emotion is uncomfortable, but it’s not dangerous. I can get through this.” Or you can say, “This is anxiety. It’s not a heart attack.”

You are allowed to acknowledge the things that are difficult. You can describe your emotions or your situation. But don’t label it as bad or terrible or awful.

Now, again, if calming yourself down doesn’t work, or if it makes you feel worse, then you need to try the roll-with-it method, where you completely drop the struggle against emotions. You lean in and you say, “Bring it on, anxiety. Bring it on, panic. You can’t hurt me,” and you let the anxiety flow and move on.

And you can learn more about this technique in my other videos.