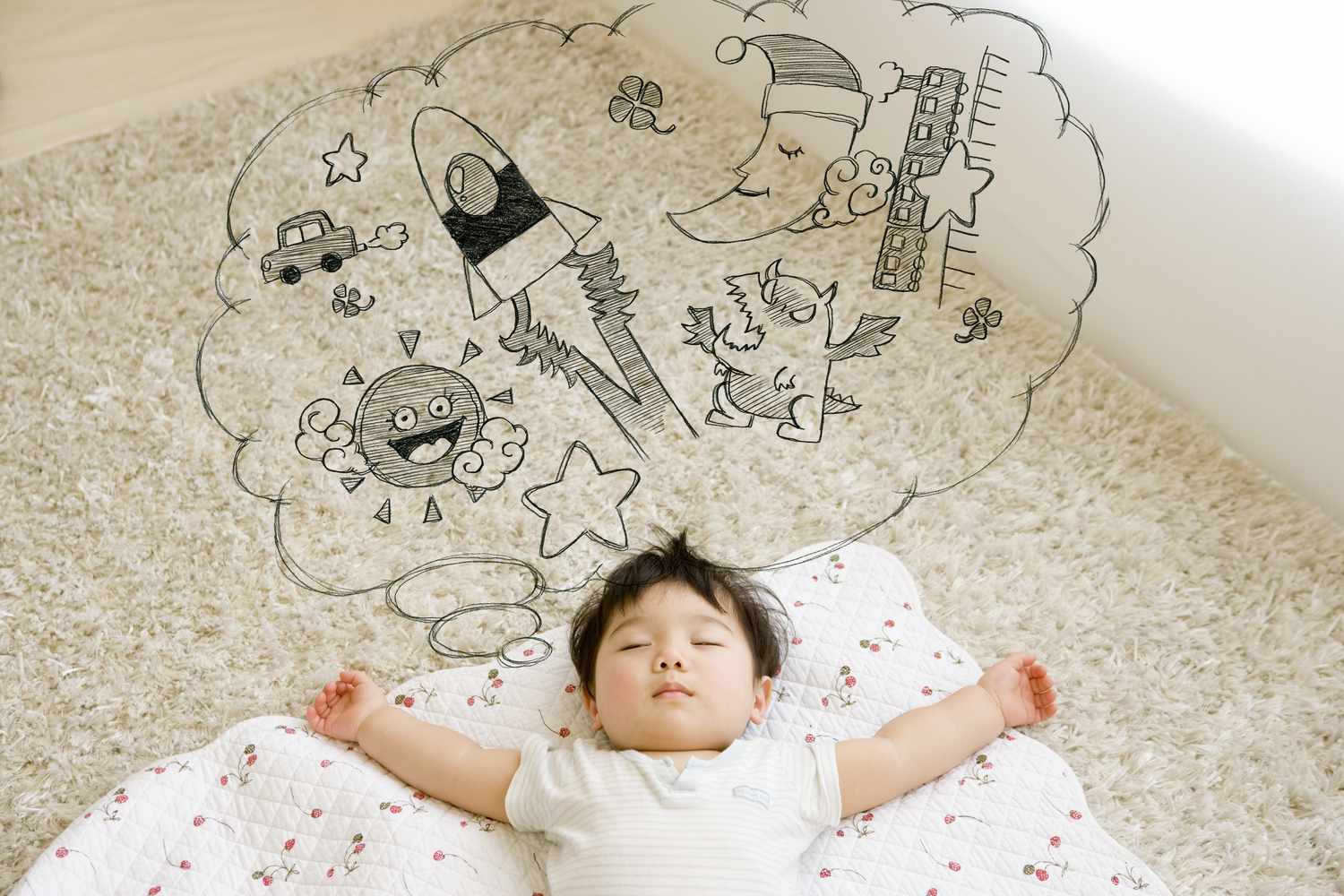 What are the 3 main theories of dreaming

Why do we dream? How do dreams provide insight into the mind? Are dreams relevant to waking life? From ancient times when dreams were considered to hold prophetic powers to the neurological phenomena studied today, dreams remain one of psychology’s most enduring mysteries. Although scientists continue to research the answers to these questions, they build their work on some commonly accepted dream theories.

The Nature of Dreams

Defined as a series of thoughts, visions or feelings, dreams arise several times per night during sleep.

As a process, sleep is cyclical. It occurs in five stages, each helping to further the body’s goal of bolstering and regenerating itself. While stages 1-4 are simply named as such, the fifth stage is called Rapid Eye Movement, or REM. It makes up about 20 to 25 percent of adult sleep.

The REM stage is the most common time of dreaming, explains the National Sleep Foundation. Dreams themselves usually last between a few seconds to 30 minutes in length. On average, people dream about four to six times per night, with adults dreaming about two hours for every eight hours of sleep.

In addition to its association with dreams, the REM stage is a time when the body processes information, creates memories and increases depleted chemicals, such as serotonin. Although the necessity of sleep has long been observed, only in recent history did people consider that dreams may also serve a utilitarian function.

The past two centuries have given rise to four of the most commonly accepted dream theories.

The famous psychoanalyst Sigmund Freud was the first to suggest that dreams may serve a particular scientific purpose. He came to believe that dreams were often a form of wish-fulfillment, the American Psychoanalytic Association says. In a dream, a subject could act out desires he or she could not fulfill in waking life. Some types of dreams, however, proved problematic within this model, such as dreams involving punishment or traumatic events. These led Freud to believe that dreams sometimes served as a way for patients to express guilt or conquer trauma. All these conjectures played into Freud’s overall (and revolutionary) theory of dreams: that they were manifestations of unconscious workings of the brain.

Although Freud and Carl Jung were contemporaries, they disagreed strongly (and famously) about the nature of dreams. Freud believed that dreams, by nature, disguised their meaning. In contrast, Jung believed that dreams were actually direct expressions of the mind itself. Dreams, he thought, expressed an individual’s unconscious state through a language of symbols and metaphors. This “language” was natural to the unconscious state, but difficult to understand because it varied so much from waking language. Notably, Jung also believed that universal archetypes (or images) intrinsic to all human consciousness existed within this language. He believed that dreams served two functions: to compensate for imbalances in the dreamers’ psyche, and to provide prospective images of the future, which allowed the dreamer to anticipate future events.

Yet another theory arose with the discovery of REM. The Activation-Synthesis theory was conceived by Harvard professors Allan Hobson and Robert McCarley in the 1970s, explains Joe Griffin of the Human Givens Institute. Hobson and McCarley discovered that during REM sleep, electrical signals called electroencephalogram recordings, or EEGs, pass through the brain. They theorized that the brain naturally reacted by attempting to make sense of the random stimulus. Thus, dreams had no intrinsic meaning; they were just a side effect of the brain’s normal activity. While this theory was revolutionary at the time, the continual advancement of technology has led to tremendous revision of this theory.

Finnish psychologist Antti Revonsuo is one of the latest researchers to suggest a convincing theory about the function of dreams. Revonsuo found that during REM sleep, the amygdala (the fight-or-flight section of the brain) actually fires in similar ways as it does during a survival threat. “The primary function of negative dreams,” he explains, “is rehearsal for similar real events, so that threat recognition and avoidance happens faster and more automatically in comparable real situations.” In other words, dreams are an evolutionary trait designed to help us practice being safe.

Advance Your Understanding of Psychology

There is no doubt that sleep is vital to living a healthy life.  Not only is it key in maintaining a healthy lifestyle (in fact, those of us who are good about our sleep often have a healthier weight than those of us who struggle to sleep regularly), but it works wonders for your mental processes as well.  Although most scientists still debate the specific reason for why sleep is so important, there are many theories that explain why we do it.  During sleep, the brain is shown to actually restore and replenish energy stores for the next day, in addition to strengthening your immune system.

Sleep is also believed to be adaptive, having evolved to tune out the external world when the threat of danger is at a minimum.  This explains why some animals sleep at night, others sleep during the day, and others sleep according to their own peculiar cycles.  Only a few animals, such as frogs, exhibit states that cannot technically be considered sleep.  Fun fact:  Dolphins have uni-hemispherical sleep patterns, meaning that their individual cerebral hemispheres take turns sleeping!

Sleep is also extremely important for facilitating learning.  Sleep strengthens neural connections, which are at the basis of learning.  Studies have shown that in memory testing, participants perform better having slept in between tests  than those who did not.  Other studies have shown that during exam weeks, students experience an increased amount of REM sleep, supporting the idea that when a greater amount of mental consolidation is necessary, sleep, especially REM sleep, is vital to the brain and body.

So what exactly happens when we sleep?  Most people can answer this pretty easily:  Dreams happen when we sleep!   However, many people don’t know that there are in fact two different types of dreams, REM dreams and non-REM dreams.  The defining difference is that while REM dreams are often characterized by very bizarre and surreal events, non-REM dreams generally involve dull and mundane events.  So, next time you wake up from a dream about folding your socks, you can be sure your were in the middle of non-REM sleep!

But what exactly are dreams? The theories to explain dreaming have many similarities to the theories that explain sleep.  The first theory is called the activation-synthesis theory.  This theory states that during sleep, random brain activity occurs.  These random neural firings then activate parts of the brain that would normally be interpreting sensory input.  As a result, your brain must find a way to make sense of this random brain activity by synthesizing it with previously stored memories.  Evidence against this theory states that if this were true, our dreams would actually be much more bizarre than they already are and share even less similarities with waking life.

The second theory results from the work in the field of psychoanalysis done by Sigmund Freud.  Freud presented the theories of manifest content and latent content.  According to his research, dreams actually contain messages that are generally hidden from the conscious awareness but represent unconscious conflicts within the mind of the dreamer.    This theory can be broken down into two parts:  manifest content, which is how the dream actually manifests itself within the dreamer and how it is remembered once the dreamer wakes up, and latent content, which is what the dream symbolizes to the dreamer.  Although there is no real support for Freud’s theory, it does offer an interesting insight into the endless ways the brain may be working and also how it could be interpreted.

And finally, the evolved threat-rehearsal theory contests that similar to how we have adapted to sleep at night, we have also evolved to experience dreams that simulate life-threatening situations thereby allowing people to rehearse, and also learn from, the particular situation.  According to this theory, dreaming may in fact be a direct result of evolution.  Several facts support this theory, specifically that dreaming is associated with the amygdala which is activated by real dangers.

While sleeping and dreaming have yet to be definitively defined, they are indicative of the endless possibilities behind the mystery of the human brain, which is pretty cool!

The dreamscape has been a source of fascination throughout all of human history. Dreams have offered relentless inspiration for artists and writers, providing the fuel for breathtaking work. Just as the art world has found greater meaning in our dreams, so has the study of psychology.

Let’s take a closer look at the science and interpretation of dreams.

Definition of Theory of Dreams

Dream theories attempt to account for the content of our dreams and how they shed light on our deeper psychological states. They seek to uncover the function of our dreams. What meaning or significance are our dreams tied to?

What Do Dreams Tell Us About Consciousness?

Some theories of dreams posit that dreaming offers us a deeper glimpse into our consciousness. These theories propose that they are representations of deeper parts of ourselves we are not consciously aware of. By analyzing our dreams we will better understand what we feel, and why we do the things we do in our daily life.

Other theories, like the neurocognitive theory, propose that our consciousness informs our dreams. Our experiences in the world create a framework for the dreaming stage, where we find themes and events similar to what we experience in waking life.

There are many theories on dreaming in psychology.

As the name suggests, this theory holds that dreams help us to process memories, ultimately storing or expunging them.

This theory looks at dreams in a more utilitarian way. The physiological function theory believes that dreams are a means of keeping our neural pathways stimulated and preserved while we sleep.

This theory promotes the notion that dreams are the brain’s way of making sense of the neural activity that is produced as a consequence of rapid eye movement (REM) sleep.

The cognitive theory of dreams was developed by the American psychologist Calvin Hall, in the 1950s. He believed there was a certain continuity between our waking lives and the contents of our dreams. Hall didn’t see dream events as shrouded in hidden meaning, as Freud did. Dreams, in Hall’s reckoning, were conceptualizations of the experiences we have as we go about in the world. They were representations of our worldly beliefs.

Of all of these concepts, Hall focused on five.

Concepts of the Self

The different identities we associate with, and the various roles we fill in our dreams, represent our concept of self.

The nature of our interactions with people in our dreams, and the feelings we have for them, represent our concept of the people in our lives.

Concepts of the World

The manner in which we describe the environment of our dreams, the setting, and landscape, represents our concept of the world.

Our reaction and interpretation of behavior in our dreams represent our waking morality. It gives light to what we consider taboo, forbidden, or virtuous.

Conflicts in our dreams are a portrayal of the same themes and struggles in our waking life.