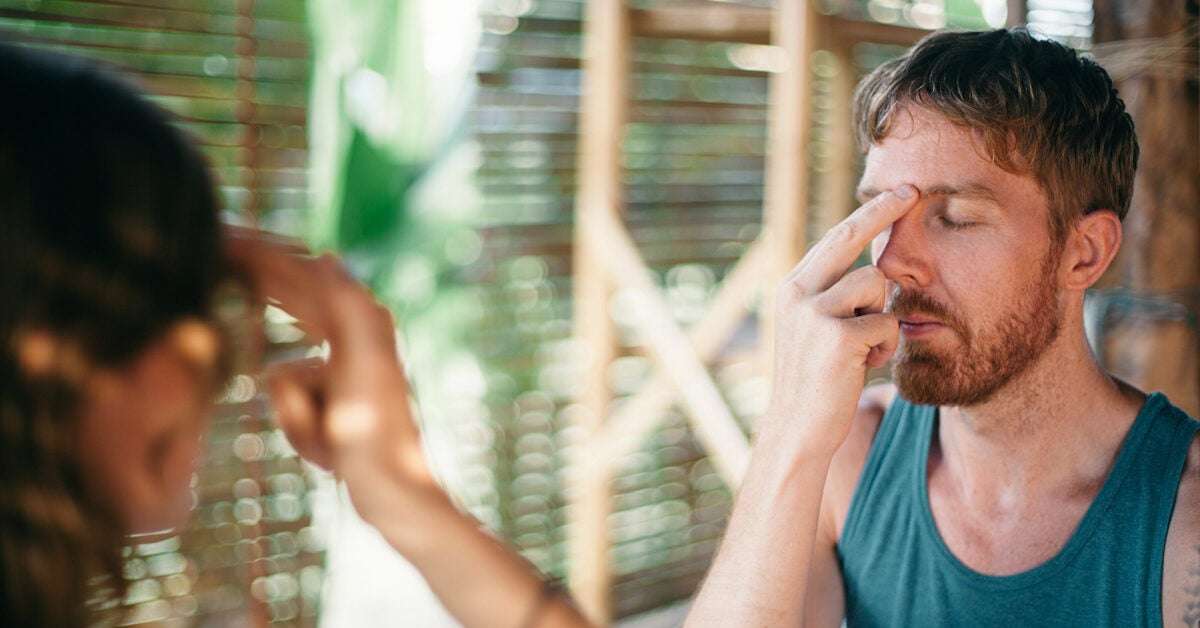 What is tapping for stress

What is EFT tapping?

Emotional freedom technique (EFT) is an alternative treatment for physical pain and emotional distress. It’s also referred to as tapping or psychological acupressure.

People who use this technique believe tapping the body can create a balance in your energy system and treat pain. According to its developer, Gary Craig, a disruption in energy is the cause of all negative emotions and pain.

Though still being researched, EFT tapping has been used to treat people with anxiety and people with post-traumatic stress disorder (PTSD).

How does EFT tapping work?

Similar to acupuncture, EFT focuses on the meridian points — or energy hot spots — to restore balance to your body’s energy. It’s believed that restoring this energy balance can relieve symptoms a negative experience or emotion may have caused.

Based on Chinese medicine, meridian points are thought of as areas of the body energy flows through. These pathways help balance energy flow to maintain your health. Any imbalance can influence disease or sickness.

Proponents say the tapping helps you access your body’s energy and send signals to the part of the brain that controls stress. They claim that stimulating the meridian points through EFT tapping can reduce the stress or negative emotion you feel from your issue, ultimately restoring balance to your disrupted energy.

EFT tapping can be divided into five steps. If you have more than one issue or fear, you can repeat this sequence to address it and reduce or eliminate the intensity of your negative feeling.

In order for this technique to be effective, you must first identify the issue or fear you have. This will be your focal point while you’re tapping. Focusing on only one problem at a time is purported to enhance your outcome.

After you identify your problem area, you need to set a benchmark level of intensity. The intensity level is rated on a scale from 0 to 10, with 10 being the worst or most difficult. The scale assesses the emotional or physical pain and discomfort you feel from your focal issue.

Establishing a benchmark helps you monitor your progress after performing a complete EFT sequence. If your initial intensity was 10 prior to tapping and ended at 5, you’d have accomplished a 50 percent improvement level.

Prior to tapping, you need to establish a phrase that explains what you’re trying to address. It must focus on two main goals:

The common setup phrase is: “Even though I have this [fear or problem], I deeply and completely accept myself.”

The EFT tapping sequence is the methodic tapping on the ends of nine meridian points.

There are 12 major meridians that mirror each side of the body and correspond to an internal organ. However, EFT mainly focuses on these nine:

Begin by tapping the karate chop point while simultaneously reciting your setup phrase three times. Then, tap each following point seven times, moving down the body in this ascending order:

After tapping the underarm point, finish the sequence at the top of the head point.

While tapping the ascending points, recite a reminder phrase to maintain focus on your problem area. If your setup phrase is, “Even though I’m sad my mother is sick, I deeply and completely accept myself,” your reminder phrase can be, “The sadness I feel that my mother is sick.” Recite this phrase at each tapping point. Repeat this sequence two or three times.

At the end of your sequence, rate your intensity level on a scale from 0 to 10. Compare your results with your initial intensity level. If you haven’t reached 0, repeat this process until you do.

EFT has been used to effectively treat war veterans and active military with PTSD. In a 2013 study, researchers studied the impact of EFT tapping on veterans with PTSD against those receiving standard care.

Within a month, participants receiving EFT coaching sessions had significantly reduced their psychological stress. In addition, more than half of the EFT test group no longer fit the criteria for PTSD.

There are also some success stories from people with anxiety using EFT tapping as an alternative treatment.

A 2016 review compared the effectiveness of using EFT tapping over standard care options for anxiety symptoms. The study concluded there was a significant decrease in anxiety scores compared to participants receiving other care. However, further research is needed to compare EFT treatment with other cognitive therapy techniques.

EFT tapping is an alternative acupressure therapy treatment used to restore balance to your disrupted energy. It’s been an authorized treatment for war veterans with PTSD, and it’s demonstrated some benefits as a treatment for anxiety, depression, physical pain, and insomnia.

While there are some success stories, researchers are still investigating its effectiveness on other disorders and illnesses. Continue to seek traditional treatment options. However, if you decide to pursue this alternative therapy, consult with your doctor first to reduce the likelihood of injury or worsening symptoms.

Humans are always looking for better ways to relieve stress. Medications may work, but they have side effects. Many people seek alternative solutions, such as EFT tapping. EFT stands for Emotional Freedom Techniques, and users say that this simple technique helps them feel better quickly.

EFT tapping has roots in the 1970s when several doctors began stimulating acupressure points to help their patients deal with stress, fear, and phobias. One of them, patented by Dr. Roger Callahan, is called Thought Field Therapy. Later Gary Craig simplified the process and made it available to the public under the EFT name.

The Philosophy Behind Tapping

Disciplines such as yoga, massage, tai chi, and acupuncture rely on a body-mind connection, and evidence shows that these interventions can relieve stress, depression, anxiety, and other psychological disorders. EFT tapping falls into the category of body-centered therapies.

Tapping draws on the ancient Chinese practice of acupuncture, which teaches that the body’s energy travels along specific pathways. Certain points on these pathways are stimulated to improve the flow of energy. The stimulation is done by inserting very thin needles (acupuncture) or by applying pressure ( acupressure).

Studies show that acupuncture is effective for some conditions. Some scientists believe that it works because it stimulates the central nervous system and causes the body to release helpful chemicals. EFT tapping stimulates acupoints by touch rather than by the use of needles, making it similar to acupressure.

How Is EFT Tapping Performed?

If you want to use EFT tapping, you can perform your own tapping sequences or you can work with a practitioner. EFT tapping is easy to use as a self-help technique because you can do it any time you feel the need. A practitioner can provide in-depth help if needed.

This article is part of a series explaining how readers can learn the skills to take part in activities that academics love doing as part of their work.

Almost two decades ago a colleague in the counselling field spoke of a technique that he said would help reduce stress. As a young academic and only a few years into my clinical career as a psychologist, I was keen to learn approaches that would help relieve stress. However, he added these words: “But it’s a bit weird.”

Those words did prevent me from exploring further for another year and I still did not know what this stress-relief technique was! Fast forward and the same colleague was helping me at a community support group for women with eating issues. During the session a young lady had a panic attack. My colleague took her outside to calm.

They returned within a few minutes and the young woman was indeed calm and composed! I was very surprised. After the session my colleague said: “I showed her the stress-relief technique I have been talking about.”

I proceeded to learn all about the approach known as Emotional Freedom Techniques (EFT) and have researched its use in clinical trials for many years now. It’s commonly called “tapping” because the technique stimulates acupressure points on the face and body with a gentle two-finger tapping process. I have now used tapping myself for more than 15 years.

What is the evidence for tapping?

The evidence for this simple approach to stress reduction has been growing exponentially. Research now shows tapping is beneficial for food cravings, depression, anxiety, phobias and post-traumatic stress disorder.

What is even more interesting is that tapping affects the body’s biochemistry such as immunity and blood pressure. Just one hour of tapping decreases the stress hormone cortisol by 43%.

Better still, follow-up studies show the benefits of tapping last over time, even up to two years later.

It’s suggested tapping affects the stress centre in the brain (the amygdala) and the memory centre (the hippocampus). Both play a role in the decision-making process when someone decides if something is a threat.

Research has now examined primary school children who have used tapping in schools and found it helps with their focus and concentration. I was very interested in anything that would help my children at school and taught them tapping too.

So how can you get started?

Usually tapping is done when you have a feeling you would like to reduce. If you feel stressed, this would be a perfect time to start tapping. There are five steps:

Step 1. Rate your level of stress out of ten, where ten is the highest level and zero would represent complete calm. You can guess this number as it is just a way of you rating your feeling.

Step 2. We encourage people to state their feeling out loud in order to engage with it and pay attention to how you feel. Typically, you would say: “Even though I feel really stressed at the moment because of ______, I accept this is how I feel.”

It is important to be specific about why you feel stressed and think about that as you do the tapping process. As you say this statement out loud, tap on the point at the side of the hand, as shown below. Saying your problem out loud will not reinforce it; you are actually being honest with yourself in this moment and acknowledging how you feel.

Step 3. Tap with two fingers through the eight acupoints shown below and just say the feeling (not the whole sentence). For example, you may say “feel stressed” while you think about what is making you feel stressed in that moment.

Step 4. When you finish tapping on the last acupoint (top of the head), pause and take a breath. Re-rate your level of stress after that single round.

Step 5. If your rating out of ten is still high, continue tapping as many rounds as you want until it feels lower in number, or you notice a shift. If you were to think of other feelings as you are tapping, you can change the words. For example, you might start tapping on feeling stressed about a work task, but after a few rounds you notice you really feel overwhelmed and wishing you had support. You can change the words to reflect this and say “I feel overwhelmed” instead.

The underlying mechanism is that the tapping at these acupoints sends activating or deactivating signals to brain areas that have been aroused by the phrases. Tapping generates these electrical signals via the principle of “mechanosensory transduction”.

As a brief intervention that can be self-applied, tapping is now backed by more than 100 randomised clinical trials (the most accepted form of research). It appears highly effective and rapid compared to conventional treatments.

So, while it may look a little strange, tapping is equivalent or comparable to gold-standard approaches such as Cognitive Behavioural Therapy (CBT). It’s worth trying next time you feel stressed!

You can read other articles in this series here.